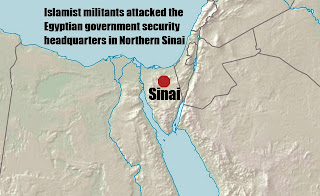 The militants had climbed onto the roofs of buildings across from the headquarters building and fired rocket-propelled grenades, one security source said. Machinegun battles were still being fought around the building.

On Saturday, Reuters reported a witness and security source saying that militants attacked an international observer base close to the borders of Israel and Gaza in Sinai. Two Colombian soldiers were wounded, an official from the observer force said.

Egyptian officials did not comment on the reason for the Sunday attack.

But Saturday's attack was triggered by an anti-Islam movie produced in the United States.

"Innocence of Muslims," the film has provoked outrage across the Middle East and led to the storming of several U.S. missions in the region.

Posted by Antusabun at 6:00 PM